Work together and siege the day, or fight alone and rage-quit.
by Matthew Hayes

I should probably get something out of the way as quickly as possible: Rainbow Six Siege is an unapologetically hardcore tactical shooter. You need to understand that going in, or you’re not going to enjoy this game. This is not a first-person shooter for people who get their kicks by doing quick, 360-degree no-scopes for the final kill in a Call of Duty match. This is not the multiplayer experience for those who love to charge into an arena with a band of Spartans, guns blazing, jumping from high ledges to ground pound groups of unsuspecting foes. Siege is a game that gives you one precious life to complete an objective, and it demands that you do so methodically and cooperatively.

So far the majority of complaints from those who are still deciding whether or not to purchase this game concern the lack of a single-player campaign. It’s true that Siege is pretty much an exclusively multiplayer, online experience. There are ten “situations,” however, which you can play through offline, and these are specifically designed to be played solo. These situations are designed to introduce players to a handful of operators, and to all of the mechanics that make the multiplayer experience so compelling and complex. Everyone starting out should take the time to work through these - I really can’t stress this enough.

Siege doesn’t try to be all things for all people, though, and when you complete your tenth solo situation an eleventh mission is unlocked that places you in a squad with four other people. It’s as though Ubisoft Montreal designed this just to push the solo players online and into a group, forcing them to communicate and work together. And work together you must if you want to have any hope of completing that last situation. I spent the majority of my night failing, going from squad to squad, until I was finally plugged into a team with mics. Without spoiling anything (it’s incredibly jarring and intimidating the first time you experience it), I’ll just say that the final situation is one wherein it’s almost impossible to know what’s happening around you without constant communication. That people are not yet plugging in their microphones and playing cooperatively is apparent, as at the time of writing this review only 0.8% of PSN players have unlocked the trophy for that mission.

This has been one of my major frustrations so far. If you’re not part of an actively communicating team, you’re not likely to succeed in either of the game’s online modes. Multiplayer (PvP) is an intense, multi-round volley of attack and defense. If you’re on the defending team there’s some kind of objective (a hostage or a bomb) in a room that you’re set with protecting. You’ll do this by quickly analyzing your surroundings and fortifying defenses with traps, barricades, sensors, and surveillance. While building your fortress you’ll be on the lookout for little robotic spy-cams, controlled and used by the enemy in an attempt to see where you are and what you’re doing. 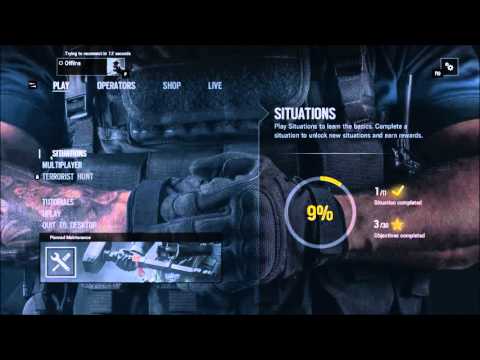 This preparation phase, for both sides, is crucial. All it takes is one Leeroy Jenkins to screw the whole team over, and this can make playing online an infuriating experience. Did I mention that you’ll be spending most of your time on a team? Right, so know this: friendly fire is always active, and you only have one life. Nothing is more deadly or more frustrating than an inexperienced teammate wielding a shotgun, especially defending in tight corners, or stacking behind a shield bearer in an attack. Nothing gives you away faster when preparing to breach a room than that one guy without a mic who sprints through all of the barbed wire outside the door, making a bunch of noise. Sometimes you have a great line of sight through a doorway and right when you decide to start firing a teammate will charge in and catch all of those bullets for you in their back.

Terrorist Hunt (PvE) is a similar operation, only you and four teammates (you can attempt to lone-wolf it if you prefer) are engaging some highly capable enemy AI in a randomly generated scenario. The map, the time of day, and the objective are chosen for you at the beginning of each match, which is something I hope Ubisoft will change in a future patch. It’d be nice to be able to pick specific objectives on certain maps so you and your friends could practice more efficiently. As it is, Terrorist Hunt is still an intense, demanding mode that requires a lucid command of your operator’s equipment and teamwork. Accidental team kills occur just as regularly in PvE as they do in PvP.

I can't stress enough how important communication and teamwork are to success. You have to know who is taking point; you have to know when your teammate it detonating a breach charge; you have to know when to punch a hole in the wall and throw in a smoke grenade so your buddy upstairs can rappel out of a window and bust into the room to draw fire. Without communication multiplayer becomes a drag, and it only takes one rookie or one jerk to ruin the experience for everyone. This makes the game hard to recommend across the board. On the other hand, even the simplest plans, when well-communicated and properly executed, can change the tide of a match in a hugely satisfying way. You’ll stare at the names of squad mates with whom you’ve spent the past hour conquering and think, “Yeah, we could pull this off in real life.”

Are you the one who likes to play shooing games? If yes, then this is the article for you which you will come to know about rainbow six siege game which is excellent in terms of shooting, but there is one thing that you need to keep in mind is that it runs only over the internet services. So you need to be on the higher in speed internet speed connection as that is the only thing which will eliminate the lag.

You can also consider r6 accountsif you want to skip the efforts and jump right away to the higher tier. There are many sites those who can provide it to you, so you simply need to use online services, and your work will be done in no time at all. Also, you can invite your friends in the game itself, and if there is no one in your list, then you can go for the random one.

Your main aim in this game is to shoot down the enemies, but the challenging part is that they will be from the real world, too, just like you, so you need to be more careful as they can beat you down in no time at all.

Do not ignore the league

If you want to boost your rank or the tier and if you want to earn more resources, then you should go for the pro league in this game. It gets released for a limited time period, so you need to pay attention on it else, you might miss it. In the pro league, you will have to win many matches just like a tournament, but the hardest part is if you lose any match, then you are out.

You need to do a lot of practice, and for that, there is a special offline practice mode in which you can learn or develop new tricks that you can use in the real match to beat down the enemies. So if you are interested in that, then you should go for it without any second thought at all.

Invite and have fun together

If you do not like to play games alone, then there is nothing to worry about because inviting friends and playing with them is really fun. All you need to do is play with them in the team if you want to survive till the end. There are different ways to play like solo, duo, and squad, among which you can choose anyone you like.

It is the game by which you can improve your accuracy easily, and your in-game shooting skills will get developed in no time at all. Make sure that you are on the fastest internet connection for zero lag issues while playing, which can irritate you in many ways. You can also go for the tutorials in the game, which will help in making you understand about some of the basics which are necessary to be kept in mind.