This Final Fantasy Tactics Best Setups Guide will teach you how to build all the unique characters in the game into the best, most OP version of themselves.

These are suggestions for the best builds/setups in Final Fantasy Tactics. I’ve played through the game tons of times, so I’m going to take practicality into account. I’m also most familiar with the PS1 class and ability names so that’s what I’ll be using, even though I’ll probably be mentioning War of the Lions (WotL) exclusive things.

Obviously Ramza’s gonna be your go-to guy. I’ve tried all sorts of things with him — magic, physical. I’ve found that physical is the way to go with Ramza. You’re going to want a build that also makes the 1v1 duel with Wiegraf (Wiglaf in WotL?) at the end of Chapter 3 easy.

I’ve usually found that going monk on him early is the way to go, then swapping to ninja later for dual swords, then back to monk for double punching is the strongest thing you can do. I think, late game, Dark Knight is a good fit for him thematically, and he’s most likely going to be the only person who has the kill count and massive JP total necessary to swap into the Dark Knight job. Here’s the final setup I’d suggest:

Alternatively, this build is really all you need to punch your way to the top, and doesn’t require as much time investment:

Ramza is wide open overall, so you can do whatever you want with him, but in all my times through Final Fantasy Tactics, those are the setups I always seem to come back to. 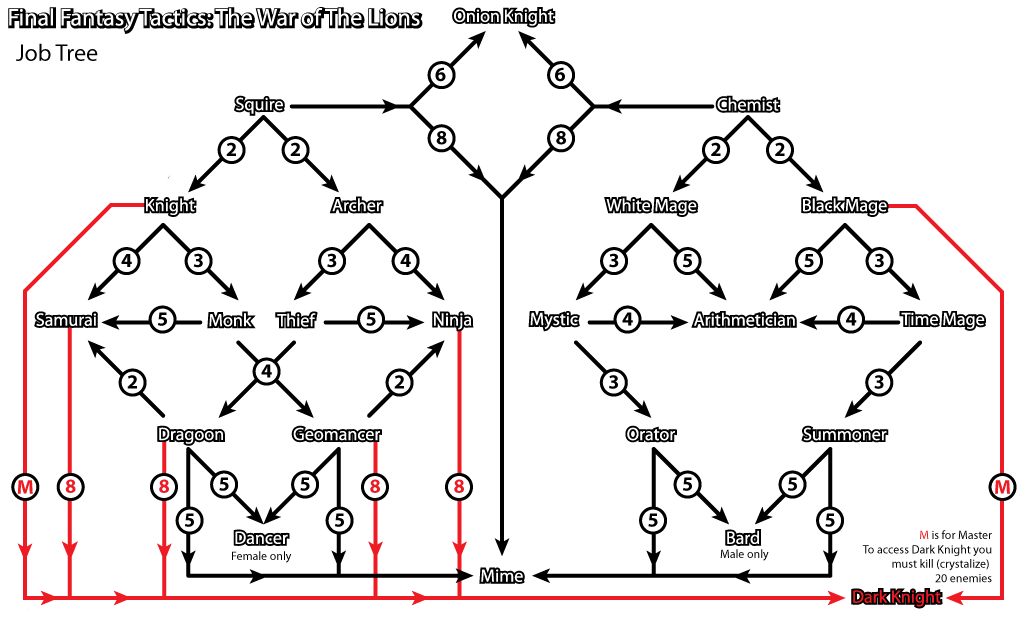 You’re going to find that Agrias gets overshadowed in every possible way by Orlandu (Orlandeau?), however you can certainly beef her up to the point of being a top tier character thanks to the Tynar Rouge accessory she gets in War of the Lions. Take her out of her main job, it has tremendously bad PA.

You’re going to want to make her a knight or a geomancer, it’s up to you. I usually go with knight. The tradeoff here is Geomancer can equip PA boosting armors, and the Knight can use the stronger knight swords. Either way, you’re going to have to level in Geomancer for a while to get Attack Up, so you can decide your preference then. Before knight swords are available, Geomancer is hands down the better option; though Battle Skill is useful throughout the game for utility.

Pretty simple, nothing fancy. In all likelihood, no matter how much time and effort you put into Agrias, you’ll most likely be replacing her with better characters in Chapter 4.

Mustadio used to be a must-have party member before Balthier got added in War of the Lions, who does everything Mustadio can do and more. Mustadio is basically your go-to guy with a gun, you don’t really need to do much with him in order to maximize his potential, and you’re eventually going to replace him with Balthier most likely, unless you really, really like Mustadio. Here’s the setup:

At first glance, these are basically the same character. They’re slightly different. They’re both largely useless. They’re less useless in WotL due to improvements to their spells, but they’re still beholden to the gross charge time mechanic in FFT that makes magic overall inferior to super powerful instant cast physical skills.

In general, Rapha is better in combat due to her skills not using Faith in the calculation. Malach is usable, however, so if you want to invest time in him you could make a relatively powerful unit with a build like this:

Rapha has a sort of unique feature in that her bravery is garbage level low, so you probably want to use her as your dedicated item-finder (low bravery = better items). Here’s the build I’d suggest for her:

As we get into endgame units, they start to get a little over the top. Beowulf has all the Oracle skills except they’re instant cast. Basically he has a ton of incredible status effect skills at his disposal, and he’s really good at controlling fights.

The most useful of his status effects are probably petrification, sleep, don’t act/don’t move and mana drain. You’re probably going to want to give him a robe over heavy armor for the mana, but other than that he doesn’t need much work. I like to go with a bit of a hybrid build:

Reis is secretly the most stupidly overpowered unit in the game, but it takes a lot more work to get her there than it takes Orlandeau, Balthier and Beowulf. The reason is that she has insane stat multipliers in her base class and inherent two swords, but no real skills or abilities to take advantage of them. She also can only equip female-only equipment, which is rare to come by (but very powerful). Here’s the setup you want:

Then you give her two rune blades for +4 MA, a ribbon, a minerva bustier and Agrias’s Tynar Rouge and she becomes a killing machine. This is one of the best setups in Final Fantasy Tactics. It takes a fair amount of grind but I highly recommend you try it.

Balthier’s a little interesting because you can kind of do whatever you want with him. His main class is basically thief, machinist and ninja all rolled into one, so there’s not a lot of ways to go wrong with him. It’s probably easiest to stick with a gun, but I like to use a spear on him just so I have a Javelin 2 user, and I sort of do something like this:

You don’t have to go that route. You really could do anything. Going Ninja could be interesting — barrage + dual wield means 8 attacks which is pretty cool to watch, although it’s somewhat overkill.

Meliadoul is pretty cool but in all likelihood you’ll never ever use her. You get her super late and she’s basically a little bit better than Agrias, but not nearly as good as Orlandeau. If they’d toned down Orlandeau’s skills a little, or gave Meliadoul something unique, there may have been some place for her to belong on a team, but unless you really, really like her sprite, there’s no logical reason to invest time in building her up.

That said, you’d build her exactly the same way you build Agrias, most likely. What I always thought was they should have not made Meliadoul’s skillset a “sword” skillset, shouldn’t have given it to Orlandeau, and should have let her use her skillset with swords and crossbows. Then you’d see a lot of use for her. Oh well. Anyway I’m not even going to suggest a build, use the Agrias build.

I mean… now we’re here. This is the guy. His normal class is so over the top broken both in terms of abilities and natural attack power that you really don’t have to do anything at all with him. You’re probably going to want to keep him roughly within his wheelhouse and not try to go really deep into the class trees in order to pick up specific skills. In general the build I like the best for Orlandeau is pretty simple:

Where To Play Final Fantasy Tactics

There’s an argument to be made for Item/Martial Arts for a secondary (for the revive utility, basically), or maybe even Geomancer, but you kind of always need a battle skill user on your team because the main way you gain JP in this game is either A) Accumulate (which uniques like Orlandeau can’t access) and B) repeatedly using non-lethal skills on a fully disabled enemy. So in this case Battle Skill basically exists for the stat breaks so Orlandeau can keep whacking enemies to gain JP off them.

That about does it for the Final Fantasy Tactics Best Setups Guide for each unique character. It’s a great game and I highly recommend that you play it. It’s pretty high up on my best PS1 RPGs list.