CZ-52 Barrel Description: Czech CZ-52 Military Automatic pistol barrel in 30 Mauser caliber. Like New, bright shiny bore! This is a factory original barrel. If you like shooting your high powered, high pressure CZ-52 and plan to keep it for a long time this is your chance to put an excellent replacement barrel. This is a CZ 52 9MM barrel it looks like new it come with a ext. Slide stop and a extractor for $125.00 with FREE shipping to you for sale by Bill Thompson on GunsAmerica - 928674441.

Makarov owners are often value-minded individuals who share an interest in Soviet Bloc firearms. Another great value in surplus East Bloc pistols is the Czech CZ-52.

Brought into service in 1952, the correct name for these large-framed pistols is Ceskoslovenska Zborjovka Vzor 52. Note that there is also a CZ-52 rifle, and the two should not be confused.

The pistol was originally chambered in the 7.62x25 or 7.62 Tokarev bottle-necked cartridge. While this cartridge shares the physical dimensions of the Tokarev cartridge, it can be loaded hotter than the standard 7.62 Tokarev (see text on roller lock below). As such, care should be taken when selecting ammunition to match the pistol.

Several East Bloc submachine guns, including the PPSh-41 are chambered in 7.62x25. These fire a yet more potent version of this caliber. Again, care should be taken to avoid firing these subgun rounds in both the Tokarev and CZ-52.

The CZ-52 pistol can be converted to fire 9x19 simply by changing the barrel. Some pistols have been retrofitted from the factory with a 9mm barrel, and aftermarket barrels are available. There are some feeding and extraction issues related to this, which are discussed below. From a safety standpoint, be sure that you are firing the correct ammunition from the correct barrel.

The C-52 is single-action only, meaning that the hammer must be cocked before firing the first round. As with other auto-loading pistols, the recoil forces the slide rearward. This ejects the spent case and forces a new cartridge from the magazine into the chamber.

A magazine follower tab locks the slide open after the last shot has been fired. While not as handy as the Makarov's slide release, the slide may also manually be locked back with the external slide lock bar.

The magazine holds 8 rounds. The safety is located on the rear of the frame. Similar to the Makarov, down is fire, up is safe. The safety also acts as a decocker when pushed up beyond the 'safe' position. The pistol can be carried 'cocked and locked.' See notes below on the safety issues regarding the decocker!

The slide may be moved while the pistol is on safe, allowing the user to eject a round the chamber. Similarly, the pistol can be made ready to fire by racking the slide, thus inserting and round into the chamber, with the safety on 'safe.'

Unlike the Makarov, the CZ-52 does not use a straight blowback mechanism. Because of the high power of the cartridge, the CZ-52 has a rather complicated, but strong, roller-locking mechanism. The roller lock is composed of the barrel, two rollers, and a locking cam. When at rest, the pressure of the recoil spring compresses the cam which forces the rollers outwards towards the slide.

During firing, the rearward motion releases the cam and the continued pressure will eventually push the rollers out of the detent and allow the slide to travel relative to the barrel. Therefore, the strength of the recoil spring determines when the the slide begins to move backwards.

A version of this locking mechanism is found in some modern Heckler & Koch firearms.

The CZ-52 is considered a curio & relic by the BATF and is on the BATF's C&R list for collectors with C&R Federal Firearms License. Note that only the original caliber of 7.62x25 and not the 9mm conversions are considered C&R. Converting your 7.62x25 to 9mm is a gray area as far as its C&R status. However, there's nothing illegal about the conversion.

Click on links to see pictures or bigger version of the thumbnails.

The original magazines have been difficult to find lately, with most places just selling aftermarket magazines that don't feed right. We found a nice stash of original Czech-made magazines in brand new condition. Check them out:

This custom-made muzzle brake for the CZ-52 with threaded barrel reduces muzzle flip and hides some of the muzzle plume as well.

Please note: These are intended for 7.62x25 and 9mm threaded barrels only.

The Federal Arms 9mm Parabellum barrels lend themselves to rechambering to the 9x23 Largo round. We worked with ART Enterprises gunsmithing to do just that. We had a limited production run made in stock length, threaded, and ported configurations. THESE ARE NO LONGER AVAILABLE.

Please note: These are intended for the 9x23 Largo round only, not 9x23 Winchester, not .38 Super, nor any other cartridge. Since Makarov.com has not control over parts once they leave our facility, your use is at your own risk and Makarov.com will not be liable for damages or injury resulting from such action.

Federal Arms at one time made a nice array of replacement barrels for the CZ-52 in both the original 7.62x25 caliber and 9x19. One problem that people have reported with these is that the rollers included with these are not hard enough and tend to lose their round. Once they start deteriorating, they slide rather than rolling and they begin to abrade the barrel.

Consider that if your Korean rollers begin to lose their round, they start to take the barrel with it, but no longer rolling but sliding. Pretty soon, they'll grind into the metal and the first evidence you're likely to see is pieces of disintegrated roller flaking into the frame. By that time, your barrel is on its way out and you're looking at a new barrel...plus you're back to substandard rollers.

One way to protect your firing pin during dry firing, whether it's the surplus pin or one of the aftermarket pins, is with properly make 'snap caps'. Snap caps, otherwise known as dummy rounds, are non-firing facsimiles of cartridges including a specially-designed 'primer' that allow you to dry fire because it absorbs the impact of the firing pin rather than having the weak shoulders of the CZ-52 firing pin take that shock.

These items can be purchased by clicking this link 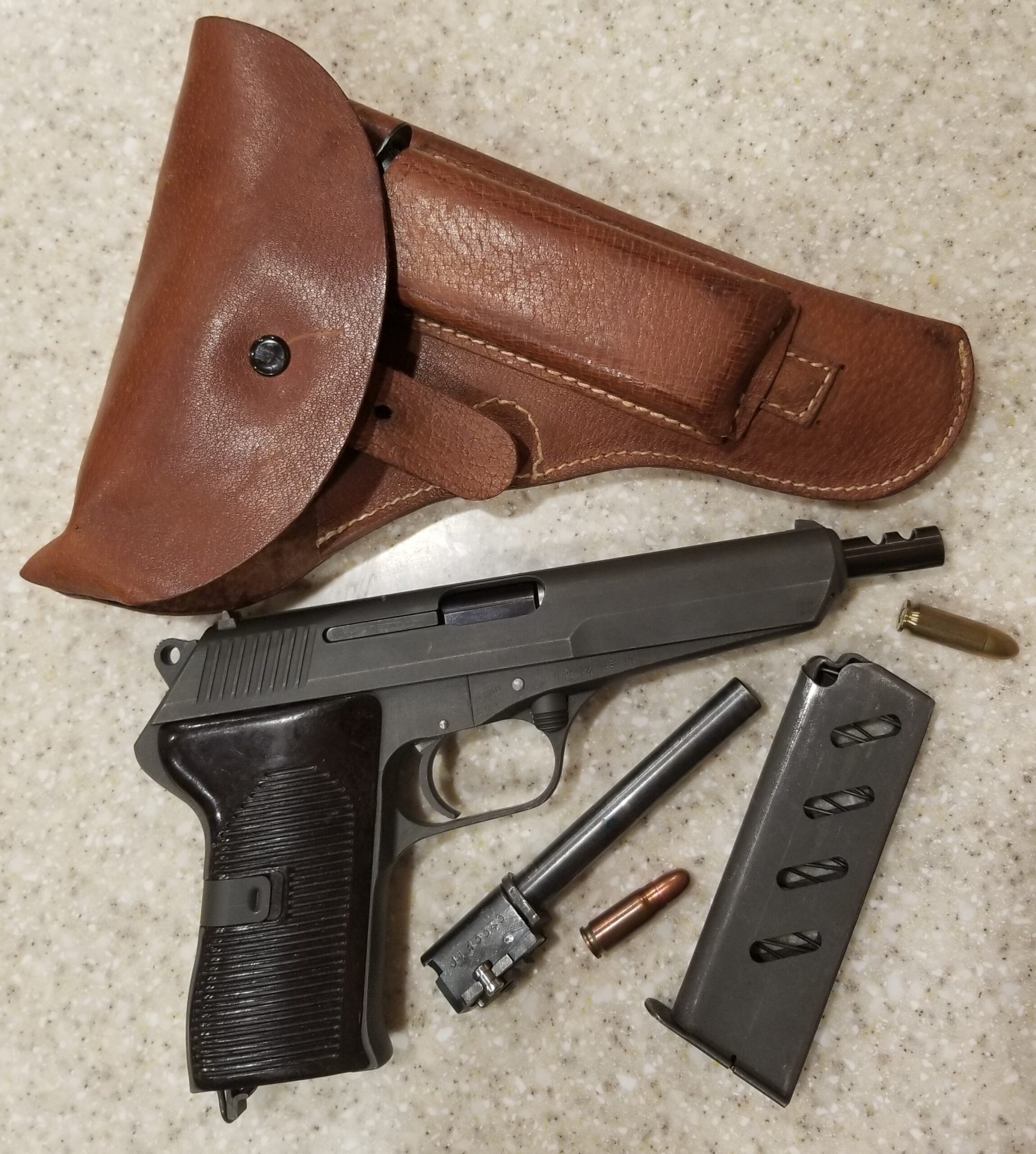 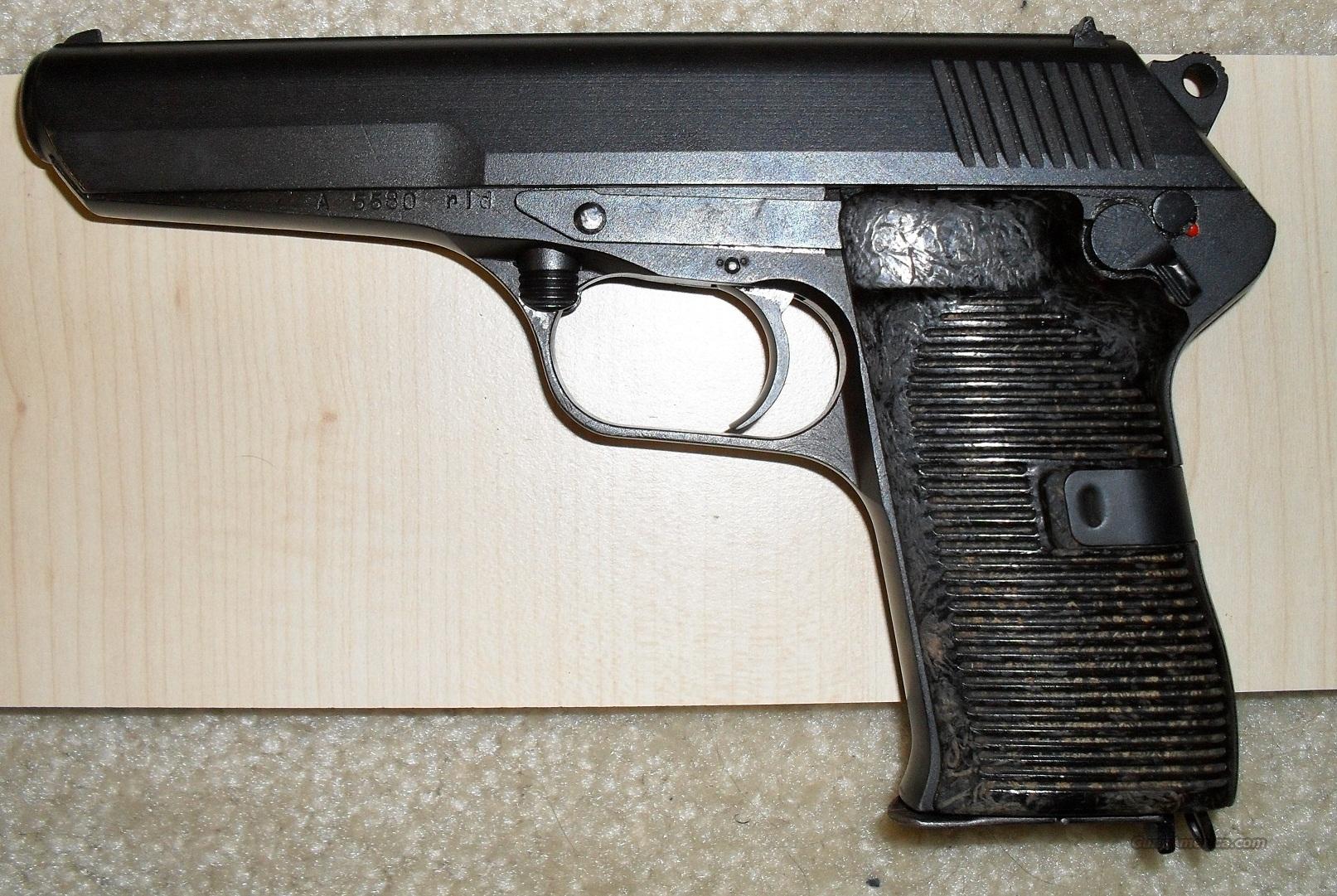 CZ-52 Extended Slide Release - Early Extended Style no longer available
This is basically an aftermarket hold-open catch with a small tab to act as a slide release and manual hold-open catch found on Makarovs and many other pistols. Very handy!

These are a brand new design made exclusively for Makarov.com! Drop-in replacement for your hold-open catch to have a real working slide release and manual hold-open catch.

CZ-52 Compact Slide Release
Drop-in replacement for your hold-open catch, but these will not interfere with thicker grips such as the walnut grips.

These items can be purchased by clicking this link

Hogue HandAll Slip-On Grip
While nobody that we're aware of makes a rubber grip set for the CZ-52, Hogue makes a comfortable universal slip-on grip that fits the CZ-52 very well. The HandAll adds a soft rubber feel to reduce perceived recoil, slight palm swells, and finger grooves in the front for a better grip.
Here's are some pictures

Walnut and Exotic Wood Replacement Grip Panels
We found a small shop that makes these gorgeous walnut grip panels specifically for the CZ-52. That means they as simple to install as removing the grip clip, dropping the old grips off, putting the new ones on and replacing the grip clip.
Here are some pictures:

All styles of Exotic Wood grips, are now out of production.

Due to the strength of the pistol, it is possible to purchase and safely use 9x19 aftermarket barrels with 9x19 ammunition. DO NOT fire 9x19 ammunition with a 7.62x25 barrel or vice versa.

Falco Custom Molded Holsters
We have a source for high-quality leather shoulder holsters specifically made for the CZ-52. They are available in horizontal and vertical (shown above) configurations. The horizontal configuration can also be used as a belt holster.

Some CZ-52 pistols converted to 9mm NATO will show feeding problems. This is primarily casued by the fact that the 9mm NATO round is shorter in length than the 7.62x25 Tokarev round. There are 2 areas of concern: magazine feed lips and the way the extractor pushes the live round into the chamber.

Examine the feed lips of the magazine. Look for jagged or bent edges. The metal at the lips is heat treated, so you may not be able to bend them back without weakening them. It may be necessary to have a welder add metal to the leading edges of the feed lips. Excess metal would be removed by a Dremel tool.

Among the accessories and replacement parts available for the CZ-52 are barrels, replacement firing pins, sears, locker rollers, and ejectors.

Some samples of accessories available:

Greg Covington has done some work on his CZ-52:

Here are the pics of the CZ52 that I modified. I have added a white dot Novak low-mount rear sight and a dovetailed green fiber optic front. Also, you may note that I've removed a considerable amt. of metal where the trigger guard meets the frontstrap to make the gun sit lower in the hand. I then stippled the frontstrap. I've rounded all the sharp edges and refinished the grips in grey. The exterior finish on the pistol is black teflon.

Here are some sites with chronograph data: